How to communicate more effectively with millennials in the workplace

Businesses have started to adapt customer communications — GIFs into emails and emojis into subject lines, for instance. But how many have considered the impact of these digital communication trends on their most valuable asset: their employees?

New research commissioned by global software company TechSmith has revealed that many businesses are failing to adapt to younger workers’ preferences for more visual forms of communications.

The Value of Visuals report findings

In a survey of 4,500 office workers across six regions, TechSmith found that compared to baby boomers, workers under 40 are twice as likely to want to use more visual digital communication methods at work, preferring content such as screenshots, screencasts, images, videos and GIFs.

Companies are failing in communicating with younger workers

The research found that businesses are missing the mark in communicating with younger workers, with 44 percent of millennials saying their company’s communications are outdated. With millennials now the largest generation in the workforce, this could be a serious problem for businesses.

But engaging with millennials using GIFs and videos isn’t just about making them feel good in the workplace and improving company culture – research has shown that using visual content in workplace communications could unlock nearly seven extra minutes a day for every affected employee. And that increase in productivity extends beyond millennials into every age group.

When compounded per employee over every hour of every work day, the time and productivity that can be saved by communicating visually truly begins to add up. Businesses stand to gain roughly 25 hours of productivity annually per employee. For a business with 500 workers, that adds up to an increase equivalent to seven full-time employees — all without hiring a single new person.

If Australian businesses were to increase their use of effective visuals in the workplace it could bring about a 0.55 percent boost to the Australian economy or generate an extra $6.53 billion in productivity.

Looking to the Future

Employee expectations have risen as a result: if employees can communicate effectively, why can’t their bosses? But many business leaders have been slow to react, continuing to rely on the same modes of business communication they have always used.

One universal truth remains the same: as humans, we are visual animals. From cave paintings to cat memes and LOLing emojis, a picture can tell a story quicker and with greater impact than words.

At a time when resources are stretched and the levels of disruption in business can be overwhelming, the good news is that the shift companies need to make when it comes to communications does not require a fundamental change to operations. With the right tools, knowledge, and leadership support, incorporating visuals into everyday processes is straightforward and unlocks productivity, creativity, optimism, and — as the research shows — profit.

Businesses that fail to adapt their communications to today’s workforce risk losing out on significant increases in productivity and watching top young talent move on to other opportunities. 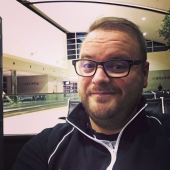 Ryan Knott has more than 20 years of experience managing communications and content strategy, public relations, social media, and media relations. He joined the TechSmith team in 2016, and previously worked at nonprofits, the Michigan Department of Education, and as a coach, communications director, and announcer, for a number of Michigan roller derby teams. Ryan is passionate about creating content that communicates clearly, engages audiences, and inspires action. Building the foundation of your business