We’ve all had those forgetful moments when we just can’t ‘ find ‘ the right word, why we call this person or… where we put our car- keys…

And while many of us expect to start forgetting things as we get a bit older, there is solid evidence now that it doesn’t have to happen as quickly as we think.

Here are surprising tips to protect your memory and make it all simpler and easier to remember.

Wear your watch upside down

Every time you look at it, you’ll give your brain a mini mental workout. It forces it out of its comfort zone as you re-interpret familiar information in an unfamiliar way.

The more you test your brain each day, the more active is stays in later life. Doing mentally stimulating tasks will keep the brain active and functional for longer.

One of the things that causes memory to fail is that we can’t drag thoughts out of storage fast enough – that’s what’s happening during those moments where it takes few seconds to think of a word or someone’s name.
However, when the researchers looked at people’s brains after drinking green tea, these parts of the brain connected faster, helping speed up how well the memory worked.

Watch something funny at 6pm

Yes, it’s a bit precise but 6:03pm seems to be the time we find things the most funny, and laughter actually preserves memory as it relates to its stress-busting effects.

Humour reduces detrimental stress hormones like cortisol, that decrease memory hippocampal neurons. That’s important as the hippocampus is the part of the brain that controls memory.

…then turn off your TV

It’s one habit that actively contributes to memory decline. There’s little learning taking place when you watch TV, and it’s learning that create neurons, releases growth factors and improves blood flow in the brain.
It doesn’t mean you can’t ever enjoy The Bachelor, but try to restict your viewing time to the programs you truly enjoy and do something more stimulating the rest of the time.

Wear cycle and ski helmets, don’t ‘ head’ footballs and always buckle your seatbelt. Do everything to try and protect yourself from injury… even knocks on the head during sports or accidents do more than leave a bump.
Those bumps produce a reduction in memory skills a few days after an accident and damage could still be seen on brain scans a year after the knock.

You know eating fish is important- after all, oily fish contains a substance called DHA (an omega-3fatty acid) that collects in the hippocampus. When level of this are high, cells is that area actually communicate more effectively with each other.

However, cooking style can interfere with how well those omega-3s work. People who boiled or baked fish had higher level of grey matters in the memory parts of their brain, not found in those who fry their fish. It was found that the heat of frying damages the healthy fats.

So stick with grilled, baked and barbecued fish. In addition, diets high in junk food also damage memory, in as little as a week if you consume a lot of it.

It is important to know our blood glucose level, easily obtained by a simple fingerpick blood test, which will indicate increase of physical activity, eating a healthy diet or maintaining a healthy body weight.

It’s a well known fact that exercise/ physical activity helps increase the size of hippocampus by as much as 8.6 percent after three months of aerobic exercise.

But if cardio is not your thing, you get a super-fast brain burst via resistance exercise. In their trial, people were asked to recall a series of pictures.

Resistance exercises release hormones which affect the brain processes that influence memory. So to help you remember more effectively day-to-day material, go do a little resistance after work and notice the difference in recall.

Eat your veggies and don’t smoke

They may be near the bottom of our list but most experts would say these habits, along with exercise, should be at the top.

In fact, those who exercised for 30 minutes or more most days, ate five or more serves of fruit and veggies and didn’t smoke, were over 45 percent less likely to experience memory problems.

Even if you engage in just one of these three habits, your risk of memory issues is reduced by 21 percent.

Another reason our memory fails at any age is that we simply don’t lodge the information in firmly enough – often just listening or reading it isn’t enough.

Writing things down imprints it more effectively, as does sitting with your eyes closed for a couple of minutes after trying to learn something.

While you try and memorise something, clench your right fist, then when you try and recall the information clench your left. It stimulates the two parts of the brain involved in memory formation and recall, making everything work a little faster. 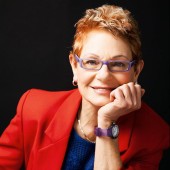 #1 Amazon Best Seller Author Terry Bahat is known as the most sought after explorer and developer of women’s emotional and physical inner strength. Using her army training, expertise and experience, she is committed to helping professional, stressed, busy, overweight women become healthier, more energetic and stronger in mind and body along with building confidence and self-esteem. How to stay productive while working from home – or anywhere else

How to Use Your LinkedIn Profile to Grow Your Business 5 Things To Consider Before Starting an App Development Company The Three Step Ritual To Rewire Your Brain