The future of ecommerce Nobody can deny the fact that online stores have become a big part of our daily lives. I personally only do groceries shopping in traditional stores and shop online for everything else and by 2021 we will have an estimated of 2.1 billion users worldwide that do the same. With that kind of numbers, you might think there would be a lot of online stores. Well, you would be right! The competition is fierce and with so many competing companies and service provider will try and find every piece of advantage that they can muster. It’s about one of those advantages that I’m going to talk today.

Ten years ago getting an online store up an running was far more difficult than it is today. You had to either build a platform from scratch or implement a self-hosted solution like Magento, X-cart or Prestashop. After that you’d have to manage the server, deleting logs, creating backups and always be on the lookout for the next surge of users that will get your site crashing in a matter of minutes.

Things have changed a lot from those days and now you have better self-hosted platforms, better and bigger hosting, and you even get E-commerce SaaS providers like Shopify or ZentoShop  that will get you started a lot faster.

There are huge differences between going for a self-hosted store as opposed to getting a SaaS(software as a service). On one hand, with the self-hosted solutions, you will have the option edit and make it adapt to your product and service, an option that you wouldn’t really get otherwise. This is a huge part of why any technical person might lean towards a self-hosted store but it’s not only cakes and rainbows.

As soon as you start looking into an e-commerce platform you’ll realize that it has a lot of dependencies and hosting requirements that you need to consider. And while the platform itself can be cheap, you’ll end up paying thousands of dollars in hosting and setup fees plus paying for an agency or developer to make the necessary updates and changes to your store. You’d think it stops here but it doesn’t. Over the course of a year, you’ll have to make several updates to both the plugins and the platform and you’ll want to make those updates as they are vital to your website’s security.

With the e-commerce software as a service (SaaS) providers, things are easier. You get your shop up and running much faster and with almost no initial cost but you will have to pay a monthly fee, plugins are hard to come by and customization is hard but the biggest downside is the scaling issue. Most providers can up your monthly fee in exchange for support for more users but that will work up to a point and then you are on your own.

Yet with all the options out there, most online shop owners still have difficulties getting their shop to the next level as without the proper infrastructure to support their shop, their shop will crumble at the slightest increase of traffic.

The infrastructure behind the stores is one of the most important things to consider when launching your shop. Making sure you won’t have any downtimes is tricky and requires a lot of fidgeting on the server side to ensure your server can and will scale gracefully the next time you have yourself a flash sale and your site gets ‘assaulted’ by customers.

Here’s the story of Zalora, one of the biggest fashion stores in Asia employing around 1500 people with a user base of over 20 million users.

They have a cool mission statement: “fashion on demand, 24/7 at your doorstep”. Cool, right? But what exactly does that mean from a technical perspective?

They have a number of digital outlets through their users can shop, from an online store to mobile apps for both iOS and Android. Those apps and the store need to be in constant communication both with themselves and with the warehouse to make sure all the orders are registered and the stock is updated. That will require a server that can handle thousands of concurrent requests, and if you ever had the unfortunate chance to be on a team that developed a service like that you’ll know that scaling is not easy nor cheap.

Zalora had a growth of about 100% year-to-year in the first 3 years and had to always chase down better hosting, faster loading time and deployments took forever so they decided to move their entire operation to the cloud.

They wanted to build on the momentum that they had and having a store hosted on traditional servers would require an effort of biblical proportions.

For the past 20 months, Zalora hasn’t spent a dime on servers, running everything through AWS. They use EC2, Redshift, S3, and Lambda together to successfully manage every aspect of their business, from the stores and warehouse to the marketing automation. They’ve managed to get their DevOps team down to 3 people, which for a business of this scale is amazing!

Moving to the cloud will not only give you a competitive edge in terms of functionality and load speed, which for the end customer is a big advantage but it will allow you to cut costs.

Now while serverless is such a great tool, there are some issues with moving from traditional servers that we need to address. The technology is old news but it’s new to most developers as it’s but for a few years that services Like AWS Lambda or Microsoft Azure evolved to a point where they could offer their services for an affordable price.  AWS Lambda performance still needs to be monitored using a third party app to get proper reports and error alerts. The serverless community is still small(yet growing at a rapid pace) and before it’s globally accepted we’ll have to educate the developers.

Luckily there are people who spearhead this endeavor and I urge you to follow and support their efforts. You can see a list of some of the most prominent serverless influencers here.

I’m eager to see what the next couple of years has in store for us developers and while I’m fully aware that the traditional servers won’t go anywhere, I expect that we will use serverless technology more and more from small websites and apps to e-commerce apps and even in the IoT segment. 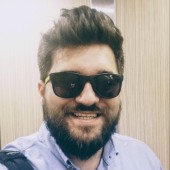 I'm a developer that after I decade of doing frontend development for companies like Macy's, Levi's Jeans and Philips, moved to the marketing department where I've been doing SMM, SEO, content marketing ever since. In my spare time, I participate in professional taco eating competitions. A leadership principle I keep re-learning